Urban planning on a whole new level: What are we to make of “instant cities”?

When it comes to urban planning, there’s nothing more urban and planned than so-called “instant cities,” or cities built by visionaries from scratch in strategic global locations. Frustrated with the limitations of today’s cities to address overcrowding, pollution and inequality, visionaries are pursuing instant cities, which tend to share the common ideals of creating connected, sustainable, inclusive and equitable societies, thereby providing residents with a life in balance.

Instant city developers seek renewable energy sources like solar and wind to reduce carbon emissions and counteract climate change. Similarly, they want to eliminate the need for cars and streets, and they lean heavily toward the construction of energy-saving green buildings. Using water more efficiently is an overarching theme, as is employing artificial intelligence to discover how day-to-day life and city services can be improved.

What follows is a brief overview of instant cities of note—two that are not yet built and two that are currently under development. The four cities with eccentric names—Telosa, Neom, Masdar City and Songdo—range from grand, bold and futuristic blueprints to projects that are still very much works in progress, as all cities are, to some extent.

Greg Lindsay, Senior Fellow at NewCities and a visiting scholar at New York University’s Ruden Center for Transportation Policy and Management, has been studying instant cities for more than a decade, and says he finds them fascinating on multiple levels. “One is the realization of just how hard it is to build a city,” Lindsay says. “It seems no matter how much time and effort a team of architects and engineers can put into it, they can never quite replicate that lived-in feeling.”

Lindsay says instant cities serve best as prototypes for what you can achieve by networking cutting-edge technologies into a unified system to see what’s possible. Songdo, for instance, has pneumatic tubes for waste collection and burns that into clean electricity.

But the larger problem is, as fast as these cities get built, they don't get built fast enough. “We call them instant cities, but when I visited Songdo there was sprawl all the way around the urban edge that popped up long before they ever even broke ground on the sustainable district,” Lindsay continues. “So, it underscores that urbanization is going to happen much faster than any of these prototype cities can solve.”

Frustrated with the limitations of today’s cities to address overcrowding, pollution and inequality, visionaries are pursuing instant cities, which tend to share the common ideals of creating connected, sustainable, inclusive and equitable societies, thereby providing residents with a life in balance.

Telosa is a proposed instant city that promises to set “a global standard for urban living, expand human potential, and become a blueprint for future generations.” In a video introducing the project, Lore suggests that the growing income and wealth disparity is harming the quality of life in the U.S. As a built-from-scratch city, Telosa can reverse that trend, he continues, or at the very least provide a new societal model from which to learn.

The guiding principle behind Telosa’s economic system is Equitism, a concept in which residents share ownership in a city’s land and prosper along with the city. If a community endowment that was focused on improving the quality of life of residents owned all the land in Manhattan, the argument goes, it would be worth more than $1 trillion today. That would generate $60 billion a year in income to invest back into the community—about twice the current annual spending—to provide residents with the best services available.

Lore proposes to invest an initial $25 billion to develop 1,500 acres for a population of 50,000 residents, with the first of those moving in by 2030. Planners envision a total of population of 5 million in 40 years with 33 residents per acre, which is on par with San Francisco’s density.

Telosa at a glance:

"A World Like No Other" 3D rendering of a futuristic city.

Neom, a combination of the Greek word “neo” (new) and the Arabic word “mustaqbal” (meaning “future”) is an ambitious plan to create a city in harmony with nature in a region bordering the Red Sea. The endeavor was announced in 2017 and is a central part of Saudi Arabia’s Vision 2030, a long-term strategy to open the country to foreign investment and build an economy that is less dependent on oil revenue.

Prince Mohammed bin Salman envisions renewable energy sources powering Neom, and in early 2021, he introduced his plan for The Line, a linear city stretching 105.6 miles across the Tabuk region. The Line seeks to preserve 95% of Neom’s natural habitat and would be free of cars, streets and emissions. All essential daily services for its 1 million residents, from schools to medical clinics, would be within a five-minute walk, and high-speed transit would accommodate longer trips. All transit, freight delivery, utilities and other networks would occur on two underground levels.

Additionally, to date Neom has announced partnerships to build the world’s largest coral garden at Shusha Island in the Red Sea, a fish farm to promote local aquaculture, and a green hydrogen power plant, among other infrastructure, commerce and cultural projects.

Neom at a glance:

Construction of Masdar City began in February 2008 with the vision of bringing together residents, students, entrepreneurs, business leaders, investors and academics in a collaborative, innovative and green community. Located near the Abu Dhabi International Airport and 40 minutes from Dubai, Masdar City has attracted some 800 companies from six continents, the region’s first clean technology start-up accelerator, and a technology park built out of recycled shipping containers. In addition to several retailers and restaurants, amenities include parks with urban farming areas, a recreation path encircling the city, and sports and gym facilities.

About 1,300 people currently live in the city, and ambitious plans call for an underground “personal rapid transit” system of driverless pods that will move people throughout the city to keep streets free of cars. After initially being bankrolled by Mubadala Investment Co., Abu Dhabi’s sovereign wealth fund, Masdar City is now attracting third-party investment.

Masdar City at a glance:

The view from G-Tower in Songdo, Incheon, South Korea

Construction began in 2005, and planners originally envisioned completion in 2015. But Songdo IBD remains under development, and the population remains lower than first envisioned by 2022. An estimated 1,600 domestic and global companies operate in Songdo IBD. The district has 20 million square feet of space that meets the U.S. Green Building Council’s LEED standards, including an exhibit hall, a school, a residential tower and the Sheraton Incheon Hotel. 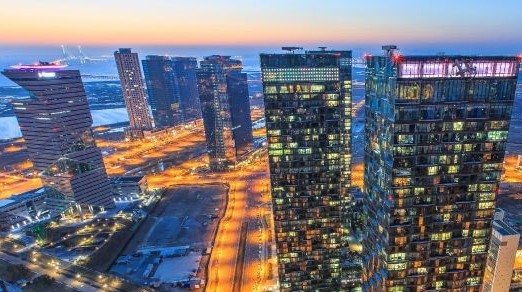 The cities are alright: Yes, they’ll survive... and be far more important in 2030 and beyond

Skyscrapers circa 2030: What’s their place in the future city? 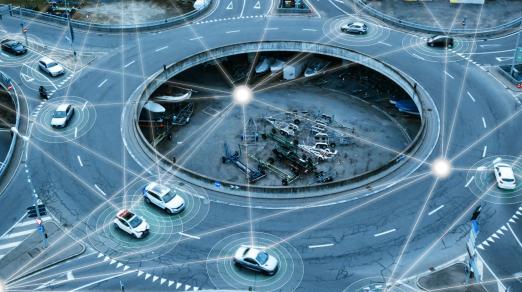 How to build safer and more sustainable smart cities of the future
Add a Comment
Comments
No comments added yet.